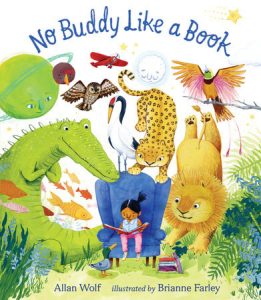 Calling readers and daydreamers, word mavens and lovers of adventure! This celebration of the power of books is a rallying cry for letting imaginations soar.

Have you ever wanted to climb to the top of Everest with one hand behind your back? Kiss a crocodile all by yourself on the Nile River? How about learning how to bottle moonlight, or track a distant star? There are endless things to discover and whole universes to explore simply by reading a book. But books are only smears of ink without the reader’s mind to give their letters meaning and bring them to life. With a rollicking, rhyming text and delightful artwork, poet and storyteller Allan Wolf and illustrator Brianne Farley remind us that books, no matter how they may be consumed, give readers of every background an opportunity to expand their world and spark their imagination. With infectious enthusiasm, No Buddy Like a Book offers an ode to the wonders of language—written, spoken, and everything in between. Pre-order here (Feb. 2021)

“Wolf’s interpretation feels refreshed by both catchy rhymes and a cast of characters diverse in race, gender, age, and ability. A sweet reminder of the worlds held within books and our power to play in them.” Kirkus Review, starred review 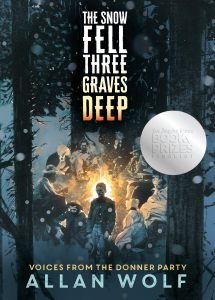 In 1846, a group of emigrants bound for California face a choice: continue on their planned route or take a shortcut into the wilderness. Eighty-nine of them opt for the untested trail, a decision that plunges them into danger and desperation and, finally, the unthinkable. From extraordinary poet and novelist Allan Wolf comes a riveting retelling of the ill-fated journey of the Donner party across the Sierra Nevadas during the winter of 1846–1847. Brilliantly narrated by multiple voices, including world-weary, taunting, and all-knowing Hunger itself, this novel-in-verse examines a notorious chapter in history from various perspectives, among them caravan leaders George Donner and James Reed, Donner’s scholarly wife, two Miwok Indian guides, the Reed children, a sixteen-year-old orphan, and even a pair of oxen. Comprehensive back matter includes an author’s note, select character biographies, statistics, a time line of events, and more. Unprecedented in its detail and sweep, this haunting epic raises stirring questions about moral ambiguity, hope and resilience, and hunger of all kinds. Order here.

“An impressive, albeit woeful, slice of American history that old middle grade readers will sink their teeth into.”
Shelf Awareness, (starred review)

“In this ambitious novel in verse about the infamous 19th-century expedition, Wolf (The Day the Universe Exploded My Head) accomplishes the seemingly impossible: an evocative and sympathetic rendering of a horrific historical event.” Publishers Weekly

“Careful attention to detail, skillful character development, and expert pacing prevent this ambitious undertaking from buckling under its vast scope. The forty pages of back matter are essential reading as well.”
The Horn Book, (starred review) 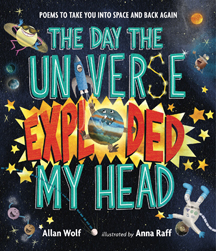 The Day the Universe Exploded My Head (Candlewick Press, 2019)

Hang on tight for a raucous bounce through the solar system and back — propelled by funny, fanciful, factually sound poems and exuberant illustrations.

“Poems about stars, planets, moons, and other astronomical wonders, accompanied by stylish anthropomorphic illustrations…A giddy ride through our stellar neighborhood and beyond.”
Kirkus Reviews (starred review)

“a gripping mystery … this fast-paced novel will appeal to reluctant readers as well as fans of mystery and suspense.”—School Library Journal (starred review)

The Watch That Ends the Night: Voices From the Titanic (Candlewick Press, 2012)

In dozens of voices-from the unsinkable Molly Brown to the captain who went down with the ship, from a young boy in search of dragons to a gambler in search of fools with money to lose, from the ship’s rats to the iceberg itself-Wolf offers a breathtaking, intimate recreation of that fateful night. Buy it here   Free Study Guide

Zane Guesswind has just killed his grandfather, or so he believes. So he steals the 1969 Plymouth Barracuda his long-gone father left behind and takes off on a manic trip to his mother’s grave to kill himself. Armed with a six-pack of Mountain Dew, a jumbo pack of Sharpies (for scribbling all over the dashboard), and a loaded gun in the trunk, he’s headed to Zanesville, Ohio, with no rearview mirror and no more worries. On the way, he meets Libba, a young hitchhiker who shares his destination, and other mystic and mysterious characters. With each encounter, and every mile marker he passes, Zane gets farther from the life he knows — but closer to figuring out who he really is. Buy it here.

“A coming-of-age road story with a supernatural twist — and a compulsively readable poetic novel about identity and belonging.”
Booksense Children’s Top Ten Pick

In Allan Wolf’s powerful and exhilarating novel, you will hear directly from the famed expedition leaders, Captains Lewis and Clark, as well as twelve other members of the Corps of Discovery. Here is a surprisingly diverse crew—from a one-eyed French-Indian fiddler to Clark’s African American slave; from the teenage Sacagawea to George Shannon, a chatty, brash kid; from a layabout drunkard to an expert hunter. You will experience the terror and excitement of fights with bears, buffalo hunts, encounters with friendly and unfriendly Indians, and dangerous whitewater rapids. You will also come to know a Newfoundland dog, purchased by Meriwether Lewis for $20, who narrates this story—and whose voice will haunt you long after the voyage is done. Buy it here.     Free Study Guide

The Blood-Hungry Spleen and Other Poems About Our Parts (Candlewick Press, 2003)

Have you ever wondered just exactly what some of your body parts do? How many times a year your heart beats? How big your small intestines are? And, equally noteworthy, which of your muscles looks most like a slug?

Certain to appeal to elementary-school children, this unique and humorous book uses poetry to explore the amazing workings of our bodies. With great verve and enthusiasm–and plenty of outrageous illustrations–Allan Wolf and Greg Clarke tickle the funny bone in these thirty-four poems while answering some of those deep anatomical questions. Ears have drums (but don’t play them), knees wear caps (even in church), and a boneless boy turns into a human puddle in this book of wacky–and anatomically accurate–poems about our body parts. Buy it here.      Free Study Guide

“If your children read only one book about the spleen this year, make sure it’s The Blood-Hungry Spleen and Other Poems About Our Parts. ”  San Jose Mercury News

“Sure to tickle the funny bone”  Publisher’s Weekly

“Science and literature have rarely blended so merrily.”  Washington Post

“Allan Wolf’s The Blood-Hungry Spleen and Other Poems About Our Partsis a perfect example of poetry¹s ability to enhance content area study. Readers learn about the functions of bodily organs and systems in poems that are delightful, engaging, and factual.”  The Reading Teacher

A Children’s Book of the Month selection, this was written with young poets in mind (age 11 and up) but it has much to offer adults and gifted elementary ages as well. I’ve included my own personal philosophy of writing poems, advice on writing technique and craft, fifty useful writing prompts and “jump starts,” memorization and presentation tips, the “Eight Habits of Highly Successful Poets,” example poems by classic and contemporary wordsmiths, a complete bibliography, a suggested reading list, publishing resources for young people, and more. Buy it here.

More Than Friends Poems From Him and Her (Wordsong/BoydsMills, 2008)

From the first furtive looks across the classroom to the blossom of new romance and the final flameout, teenage love is loaded with awkwardness, uncertainty, dreams, conflict, and pure bliss. Acclaimed poets Sara Holbrook and Allan Wolf combine their talents to explore these feelings and struggles by creating the voices of a girl and boy in the throes of affection. As they experience the giddiness of love, the poems’ two characters also face obstacles (parents) and distractions (friends) while learning to respect each other’s interests and needs. Can this relationship survive? In sonnets, tankas, villanelles, and other poetic forms, writers Holbrook and Wolf examine the efforts of two teenagers who dare to be more than friends. Buy it here.

“These poems are for you, for me, for everyone.” Jane Yolen
“Deliciously readable poems.” School Library Journal

Kids can produce instant poetry, inspired by these partially-written haiku. Composed by Allan Wolf, author of Immersed in Verse, they range from silly to serious, realistic to fantastic. Each poem has blank spaces for children to fill in; earlier in the pad, they’ll need to add only a word or two, while the later haiku will have kids writing nearly from scratch. Comes with pencil and built-in pencil sharpener! Buy it here.

Something is Going to Happen: Poem Performance for the Classroom  (Poetry Alive!, 1990)

For the classroom teacher of 6th grade and up. A selection of poems divided into speaking parts for group performance. Includes works by John Keats, Gwendolyn Brooks, Edgar Allan Poe, Carl Sandburg, Emily Dickinson, Paul Laurence Dunbar, and more. Complete with Director’s Notes and Teaching Ideas. Available only through Poetry Alive! or by calling (800) 476-8172